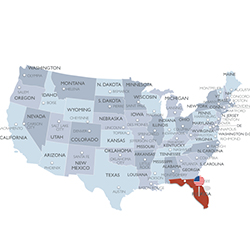 The move also reflects how a range of different types of wealth management businesses have set up in Florida, from RIAs to moves among family offices and specialist players.

Unique Wealth, the US firm, has opened a new office in Clearwater, Florida.

Tampa-based Unique Wealth is a member of the Dynasty Financial Partnersâ network of advisory firms. The business, which was founded by its chief executive, Curtis Parry, is structured as a registered investment advisor.

Florida has attracted a variety of wealth management organizations in recent years, and its presumed charms have shone more brightly due to its not having a state income tax (as with Texas and Nevada). Dynasty moved its corporate HQ from New York to St Petersburg in 2019.

To give various examples across the industry, Hamilton Capital, a Columbus-based registered investment advisor with more than $2.5 billion in assets under management, opened an office in Palm Beach. The Glenmede Trust Company, which formed a transatlantic pact with a multi-family office, created a new office in West Palm Beach, Florida â the firmâs first office in the state. Among other firms expanding in Florida are Goldman Sachs, which has added hires in its private wealth management business; Rockefeller Capital Management, which has made a raft of hires; Evercore Wealth Management has opened a new office in Palm Beach; Landsberg Bennett Private Wealth Management launched in 2019 in Punta Gorda; and Boston Private (now part of Silicon Valley Bank) appointed advisors as part of its work with a Florida-based firm. In 2019, the personal finance website WalletHub put Florida as one of the states with the highest return on investment in terms of its tax burden and provision of public services.

In 2020, the three grandsons of Adi Dassler, founder of sports and apparel brand Adidas, created a Florida-based multi-family office.