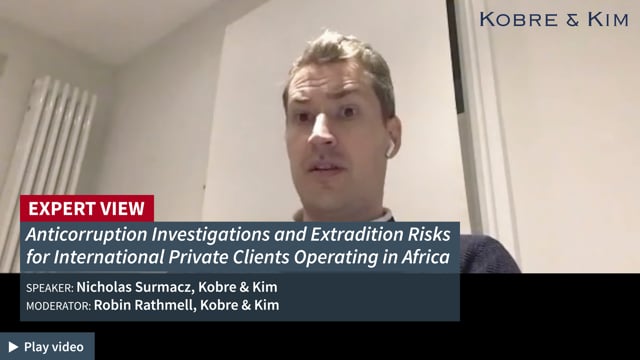 This is the seventh edition of a video series by this news service in partnership with international law firm, Kobre & Kim.

This is the latest episode in a set of videos produced by New York-based law firm Kobre & Kim exploring areas of concern for private clients. The videos are being issued by this news service, and we are delighted to continue sharing this valuable content. (To see the sixth edition, click here.)

In Episode 7 of our series, Rob Rathmell of Kobre & Kim connects with Kobre & Kimâs Nicholas Surmacz, a London-based trial lawyer, investigator and former Assistant Chief of the US Department of Justice (DOJ) Fraud Section in Washington DC. Rob and Nick discuss the area of anticorruption investigations and extradition risks for international private clients operating in African countries, including the DOJâs increased focus on money laundering within the region: âIf money is depleted from a government or company [in an African country] and ends up in the US banking system,â Surmacz said, âthen the US government usually jumps on cases like that.â

The two go on to discuss numerous issues for private clients doing business in African countries to consider, from the DOJâs occasional lack of sophistication when it comes to selecting where to open an investigation; to which post-Brexit UK legislative developments Africa-based HNWIs should be paying close attention to â especially if they plan traveling to the UK anytime soonâ¦

To find out more about the Wealth Talk series of videos and how to get involved, email tom.burroughes@wealthbriefing.com