A global survey of 388 fund managers with $1.2 trillion of assets under management by Bank of America shows that they grew more bullish in November, encouraged by stronger earnings and some hope that inflation pressures will not endure.

Some 61 per cent of those surveyed think that inflation is transitory. Improved sentiment drove allocation to US equities higher by 13 percentage points from the month before, and the overweight stance on US equities is the highest it has been since 2013.

Investors don’t expect an aggressive US Federal Reserve tightening, which fits with the transitory inflation view. Although investors did cut their exposure to inflation assets such as energy, banks and industrials, versus history they’re still overweight.

Cash fell to 4.4 per cent of all portfolios from 4.7 per cent in October – indicating an improved confidence in market direction, the survey found.

Latest US consumer price inflation rose 6.2 per cent in October from the previous year, higher than economists had expected, BoA said, and three out of four respondents to its fund managers’ poll took the survey prior to the data release. A majority of investors think inflation is a risk; 35 per cent think it is permanent, and 61 per cent think it is transitory. 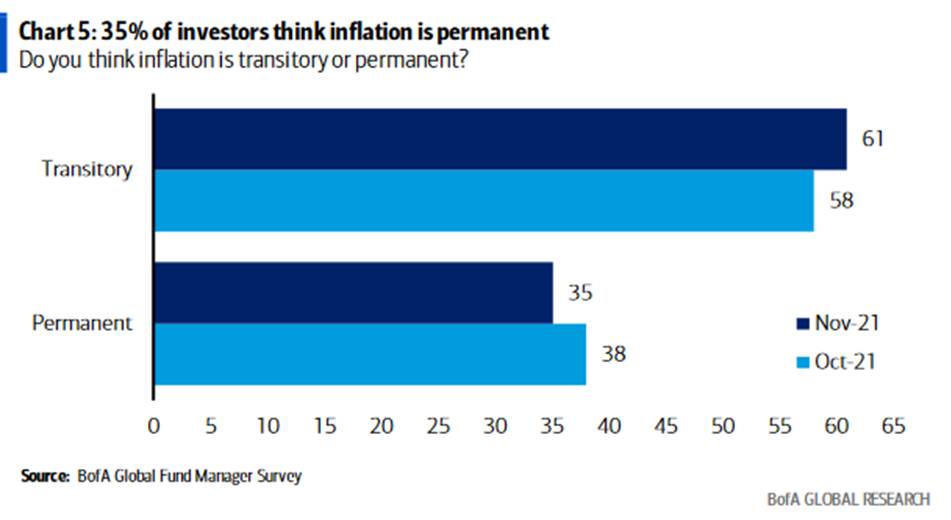